Perhaps the most noteworthy tribute to Ila's contribution to sea turtle conservation and her lasting connection to South Padre Island is the permanent memorial commissioned by the town in 2007 and installed for public display at the South Padre Island Birding and Nature Center.

Moreover, Ila's legacy is as strong as ever through the nonprofit organization Sea Turtle Inc. which she founded in 1977.  What she initially operated out of her home is now housed in a large facility remaining true to the original mission of sea turtle rescue and rehabilitation in addition to public education and awareness programs.

When Mary Ann Tous, Ila's niece, founded The Turtle Lady Legacy in 2005, she was able to introduce Ila's accomplishments to a new generation as a way to inspire them as well as to make them aware of the turtles' fragile endangered status as a species.  Like Ila, Mary Ann believes that children are humanity's ambassadors to the future and that what they learn when young will help to shape their actions as adults. Over the years, Mary Ann was to discover just how true this was when she would be surprised by visitors to Ila's house where she had moved with her husband after her own retirement.  The message was nearly always the same:  As a child, these visitors had attended Ila's Meet the Turtles program and remembered fondly what they had learned from her. 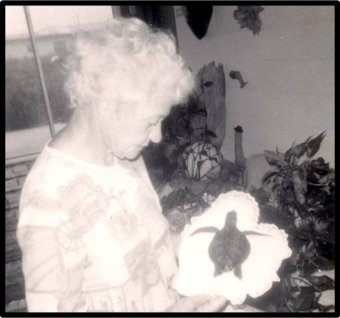 What began as little more than a chance meeting between a Brownsville contractor in charge of a project to restore sea turtle nesting to the shores of Padre Island and a retired widow with an International Scout in search of adventure gradually grew to a collaboration that would literally change the future of sea turtle conservation on the Gulf coast of Texas for years to come.

As with her aviation training, Ila became an expert on sea turtles "from the ground up."  From her early association with Dearl Adams, Ila learned all that was known at the time about the Kemp's ridley sea turtle nesting behavior and as time went on, she gained valuable first-hand knowledge that earned her the respect of such well-known sea turtle researchers as Dr. Archie Carr, Dr. Henry Hildebrand, and Dr. David Owens.  Even Jacques Cousteau paid homage to her in his Cousteau Almanac.