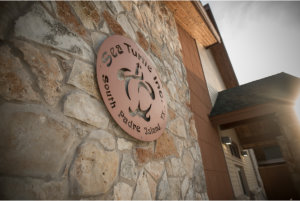 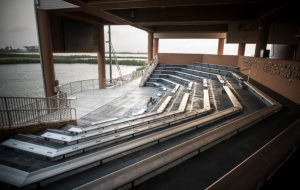 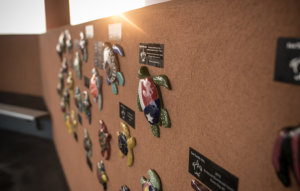 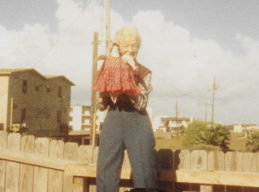 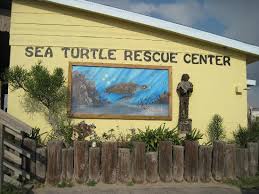 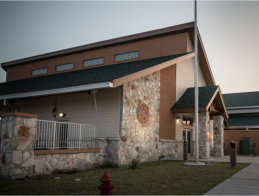 The Ongoing Evolution of Sea Turtle Inc.
Incorporated in 1977, Sea Turtle Inc. was originally housed at Ila Loetscher's home.  In 1999, after her retirement, operations were moved into a facility at 6617 Padre Blvd. where they remained until 2018 when a new expanded center was opened next to it.  (Far right photo credit: Sea Turtle Inc.)

Over the years, Ila Loetscher's legacy has grown to such a degree that the Sea Turtle Rescue Center which had been operating since January of 1999 at 6617 Padre Blvd in South Padre Island finally outgrew its space there. After a massive fund-raising effort, $6 million was raised and a new much-needed facility was built.

The new expansion took a full year of construction and functions as an education center which boasts an additional 30,000 square feet that includes six aquarium-style tanks, a 300-seat amphitheater, an indoor museum display and a gift shop.

The original Sea Turtle Rescue Center will continue to serve Sea Turtle Inc. as a rehabilitation center and is conveniently connected to the new facilities by a boardwalk. In the first nine months of 2021 alone, despite the nationwide pandemic, more than 186,000 people have visited the new complex already, making it a very popular tourist destination for those traveling to South Padre Island.

And so the evolution of Sea Turtle Inc. continues with a new director overseeing its ongoing development. Under the capable leadership of Wendy Knight, Sea Turtle Inc. memorializes Ila Loetscher's mission of rescuing and rehabilitating sea turtles in the Gulf of Mexico waters, promoting sea turtle conservation through nesting and hatchling release programs, and educating the general public.

It has been more than twenty years since Ila's passing but what she started with a small group of devoted volunteers in 1977 has withstood more than forty years of ongoing challenges to become a truly world-class organization.