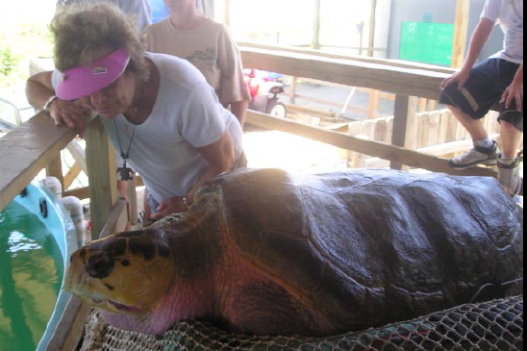 
To visitors of Sea Turtle Inc., Fred's story is a familiar one.  After being entangled in a gill net off the Texas Gulf Coast in 1996, he lost his left front flipper and subsequently stranded at Port Aransas where he was initially rescued.  After intensive rehabilitation, Fred was released back into the sea in 1997 but re-stranded again in Port Aransas in 1998 and yet again in 1999.  At this time, it was decided that it would be best for Fred if he became a permanent resident at Sea Turtle Inc.

Since that time, Fred has become a beloved member of the Sea Turtle Inc. family and a favorite with visitors of all ages.  Weighing in at more than 200 pounds, Fred is nonetheless somewhat a bit less than average in size for an adult of his species despite being fed an ample diet of his favorite food of squid over the years.

Fortunately, Fred was a success story and was well cared for during his quarter century at Sea Turtle Inc. However, many sea turtles who are caught in gill nets are not so lucky and many have either suffered deep cuts leading to infections or, worse, have drowned by being held under water too long when entangled in the nylon netting.

Gill nets were banned in Texas in 1981 yet illegal use of gill nets continues and is still a preventable source of mortality for all sea turtle species.