The Fox Family home in Pella, Iowa, where Ila lived from 1916 until she went to the University of Iowa in 1926. 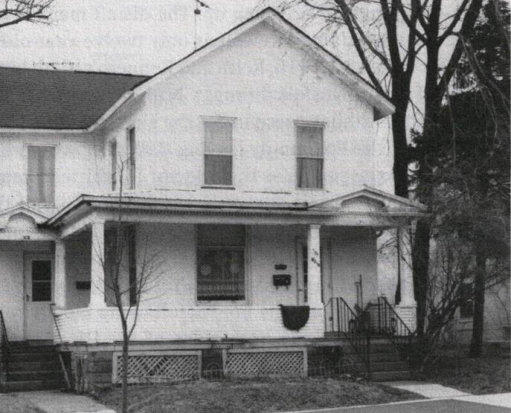 Ila and her twin sister came into the world the day before Halloween in 1904 in Callender, Iowa.  At barely more than four pounds each, the babies were monitored closely in a makeshift incubator with blankets warmed in the oven.  The weather was already turning chilly in late October and their father, Dr. Charles Fox, was tired from his duties as the town's physician but he was determined that his daughters would receive the best care possible.

The little girls thrived under their father's care and, less than three years later, they became the big sisters to another set of twins in the family.  The boys, named Keith and Kenneth, were welcome new playmates for Ila and Olive.  At that time twins were uncommon so it was even more exceptional that there would be two sets of twins in one family in the small town.  As such, when Ila's mother would take the children out, they would inevitably attract attention wherever they went.

When Ila was twelve years old, the family moved to Pella, Iowa and settled in to a spacious two-story white frame home which had a separate entrance for the patients of Dr. Fox.  It was in this picturesque place that Ila attended Pella High School where she was a popular student. Education was very important to Dr. Fox and he expected all of his children to do well in their academic courses.  In addition to the required classes for graduation, Ila was also the team captain for the girls' basketball team, leading them to the 1922 championship.

Pella was settled by the Dutch and never missed an opportunity to celebrate this heritage.  Dutch bakeries, Dutch parades, and of course, Tulip Days were part of Ila's early years.  Indeed, even after the family had long moved away from Pella in later years, their connection to this happy time in their lives was strong enough that they chose to be buried here.

In June of 1928, Ila graduated from college with her Bachelor of Arts degree and not long afterward landed a job as a recreational secretary at the Lend-A-Hand Club in Davenport where she worked as an activities director. Using the money from her paychecks, Ila enrolled in aviation courses at the Illinois-Iowa Airway Company in Rockport, Illinois. After working all day at the Lend-A-Hand Club, Ila would then drive to Rockport where she diligently applied herself to learning flying "from the ground up" by studying motor repair, rigging, aviation phraseology, meteorology, and woodwork.  It certainly wasn't easy but Ila was never one to back down from any endeavor no matter how daunting it might seem.