With a flair for the dramatic and self-confidence to spare, Ila enjoyed much positive media coverage which helped to inspire other young women to take to the skies.

Ila began her pioneering adventure in aviation back in the days just before the Great Depression. Because flying time was expensive, she quickly established a relationship with Curtiss Air Corporation that would be beneficial for both parties.  In exchange for her promotion of student flying, she would receive free air time.  So, on Sundays and holidays, she would adorn herself in the most sexy flying apparel of that era: black riding boots, tight pants, white jacket, and a white helmet tucked under her arm.  She would then strive to make herself very conspicuous and when she felt the crowd was “just right,” she would stride confidently to a trainer plane, climb into the cockpit, and take to the sky.  Once airborne, she'd make a few fancy turns around the airfield, and then land as a veteran with only ten hours of flight time. 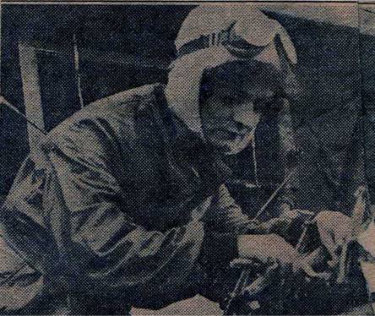 After climbing out of the cockpit, drawing all the attention that a visitor from another planet possibly would, she would walk straight to the newsman holding the biggest camera for an expected interview.  During such interviews, she would always answer the onslaught of questions making sure to throw in as many plugs for the Curtiss Air School as possible.

In the late 1920s, Amelia Earhart was working energetically towards forming an organization of all the U.S. women pilots.  She divided the country into sections and appointed Ila the organizer of the Midwest section.  The press was helpful in this endeavor, and before long the 99 Flying Club was founded in 1931, with Amelia as the president. 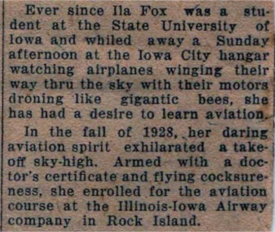